I wouldn’t necessarily say I’m a bucket list keeper, but there are definitely things I would LOVE to do. One of the things at the very top of my list was going to Maine (specifically to see the sunrise, but that didn’t quite occur…I digress). I’ve been convinced for years I would love it, and I wasn’t wrong. When my cousin announced he was planning a wedding/welcome home party with his wife in Maine, OF ALL PLACES, I knew I needed to be there (for very clear reasons beyond my not-so-secret Maine dreams, but you get the point : ). 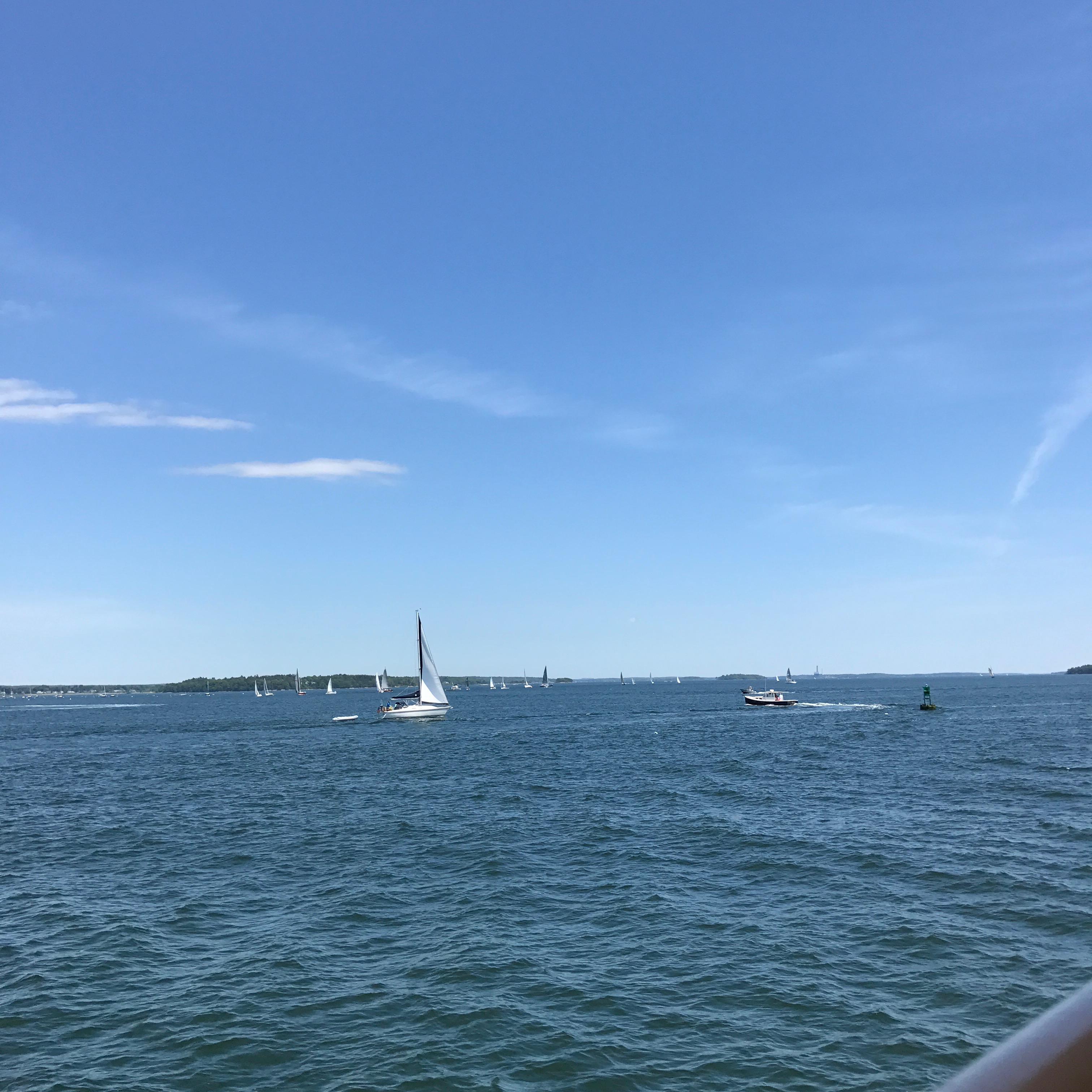 I’m forever driving south on I-95 to places like DC, North Carolina, and South Carolina, so it’s always exciting to head in the opposite direction (living on the edge, people!). On our drive north, my parents and I passed through Pennsylvania, New Jersey, New York, Connecticut, Massachusetts, New Hampshire, and FINALLY…Maine! I love watching the landscapes change when I’m driving, so it was not a bad trip at all. 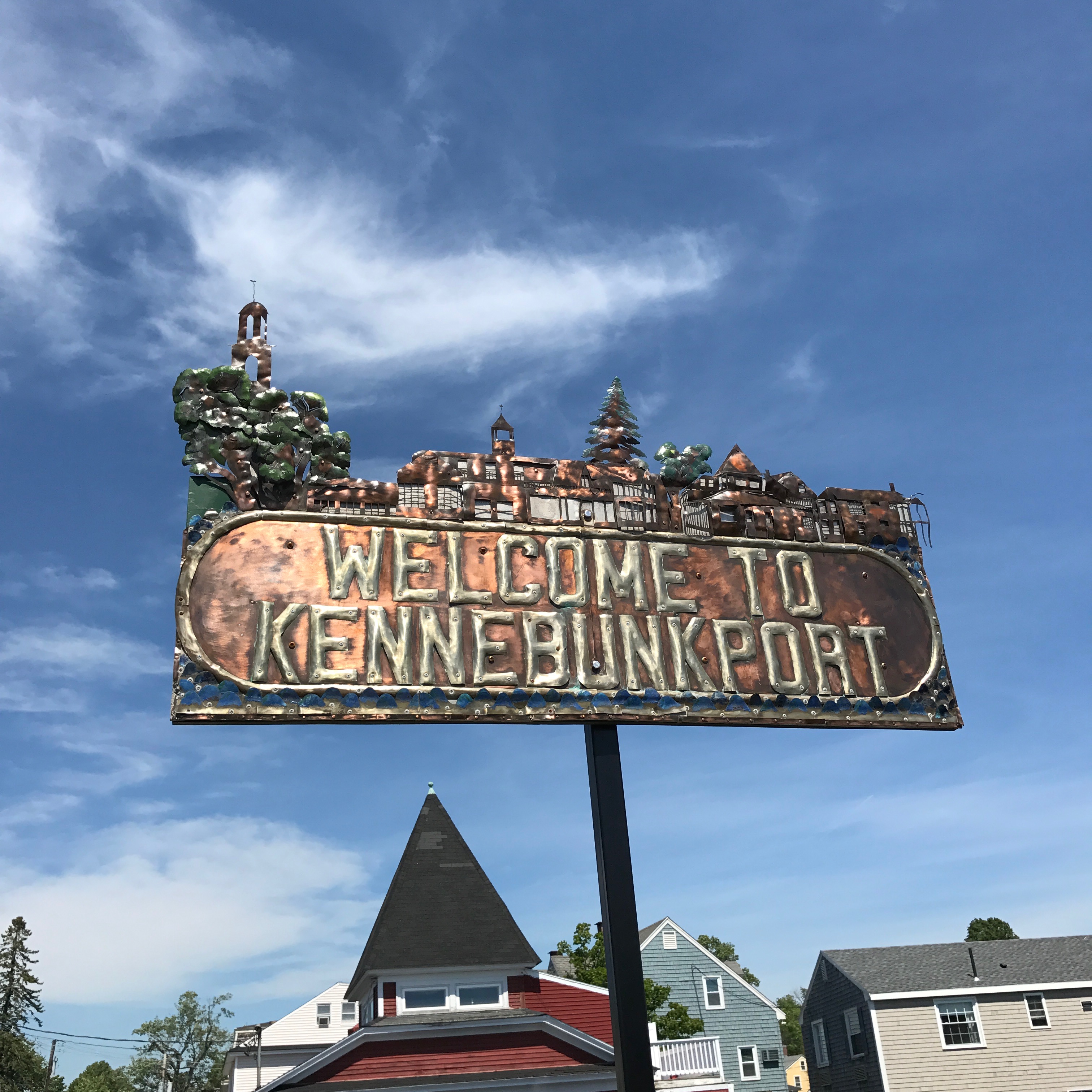 Because it was our first trip to Maine, where to say became quite the question. Kennebunk and Kennebunkport have lots of small hotels and bed and breakfasts, which all were somewhere in between lovely, might be better in person, and…not so nice. We learned Maine’s hotels fill up FAST (seriously, do not wait to book!), but we did find a few options during our last minute search. We ended up deciding to say at the Port Inn Kennebunk, which turned into one of the BEST decisions we made during the whole trip! 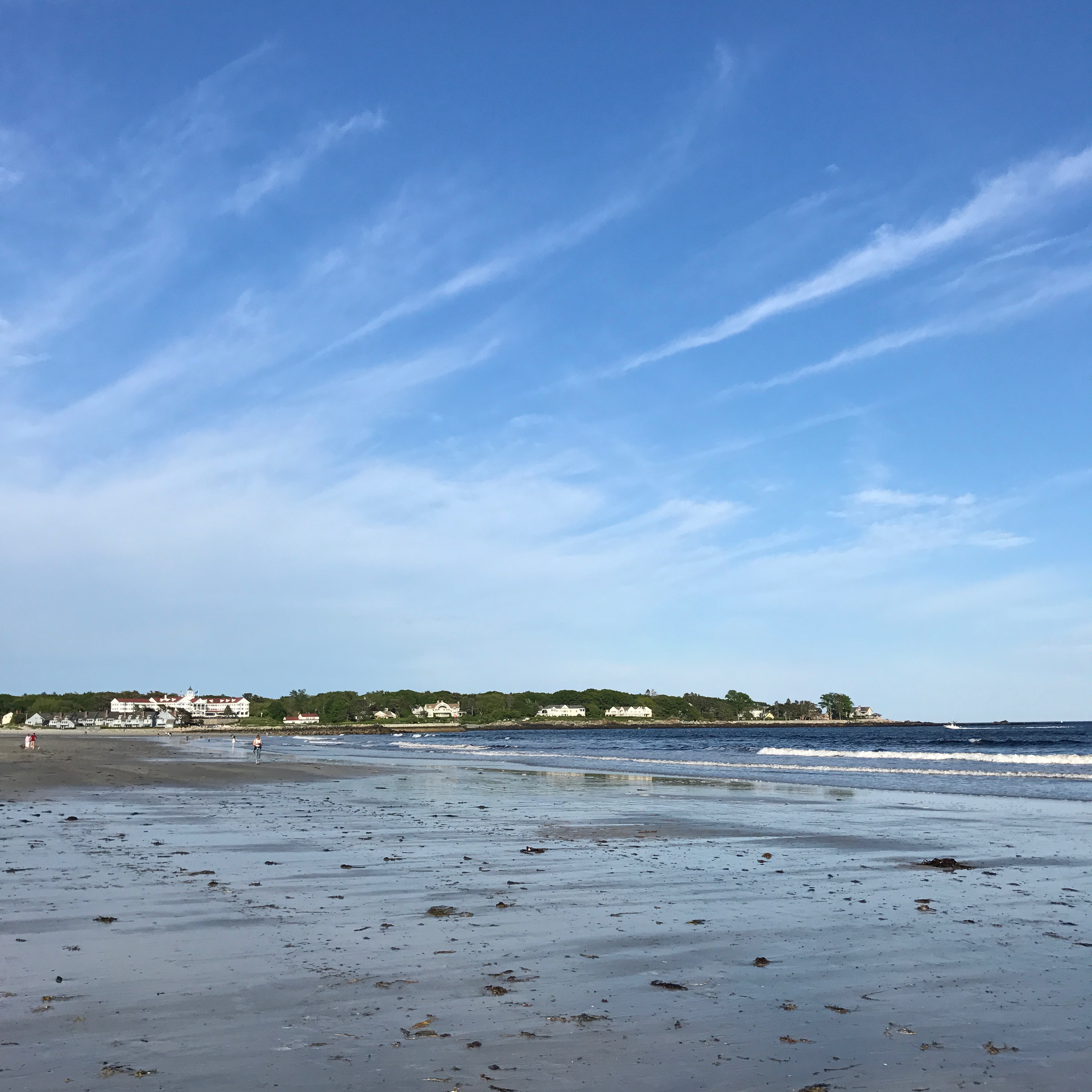 After checking into the hotel, my mom and I ventured to Kennebunkport, which was a quick 15 minute drive away. I was bound and determined to see the beach because the ocean is my happy place. Plus, I was so curious how the beach would compare to my beloved Kiawah. 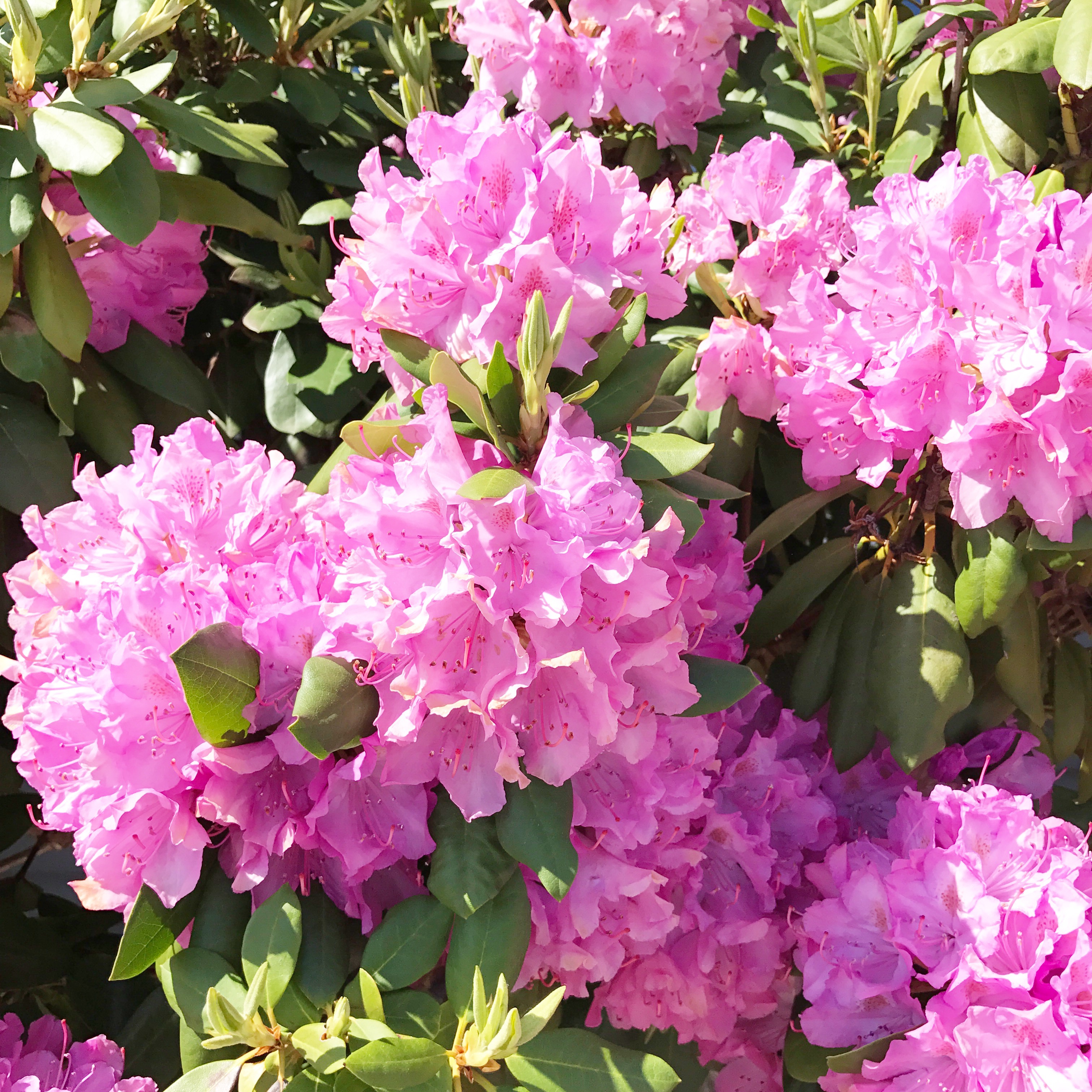 During our drive, we passed by so many farm and flower stands (there was a beautiful one steps away from our hotel), beautiful homes, tons of HUGE azaleas in bloom, and many, many bed and breakfasts before arriving in Kennebunkport. We happily drove through town to get the lay of the land (isn’t that always a must?) before deciding to find the beach (not as easy as one would think). But, when we did find the beach, the search was definitely worth it! 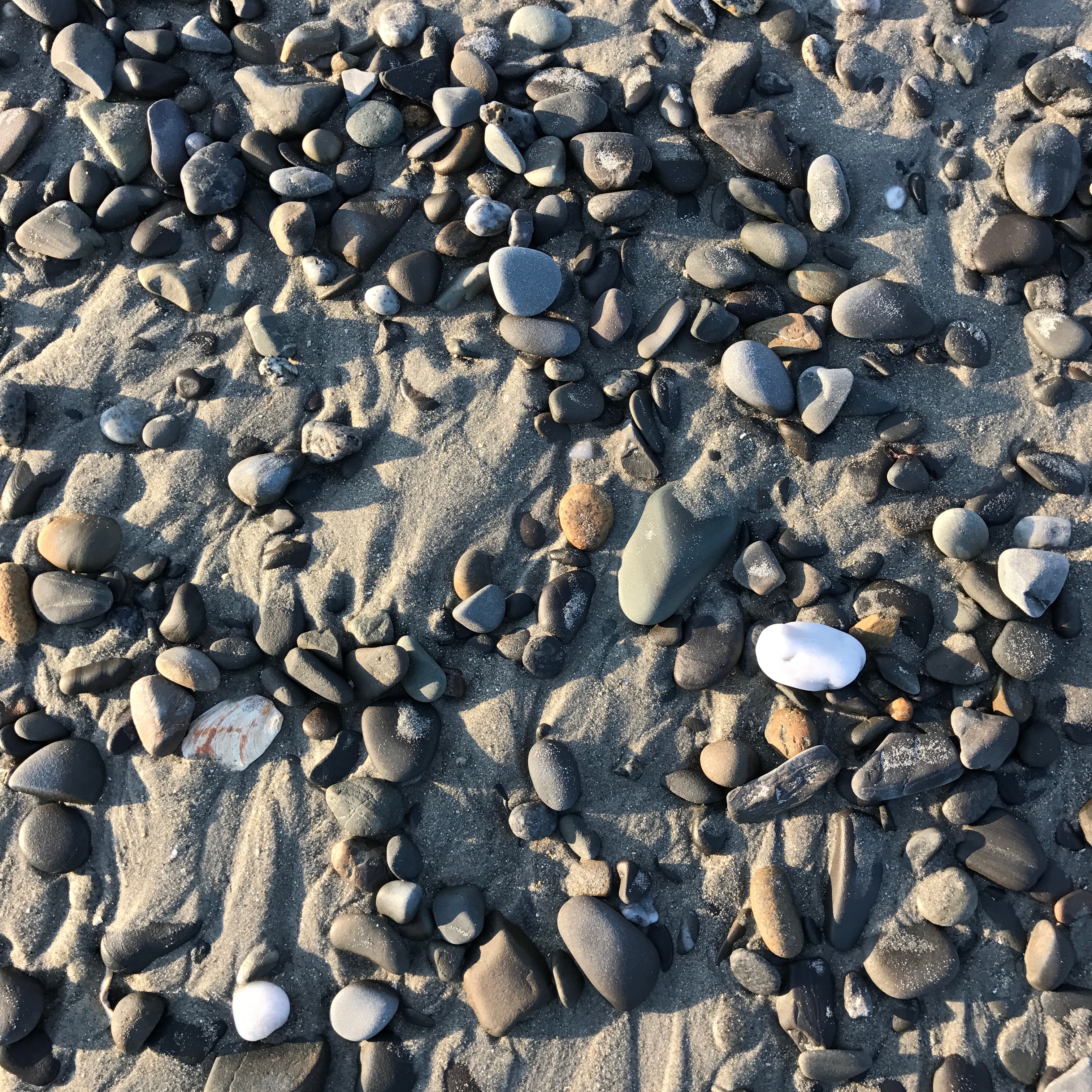 We spent a solid while walking along Goochs Beach. It was filled with smooth rocks rather than fine, soft sand, and THE VIEWS WERE UNREAL. I honestly could not stop taking pictures of anything and everything. The beach was next to an inlet where boats would speed out of (I kept thinking they were boats from restaurants in town going out to check their traps), and there were stunning homes, condos, and The Colony Hotel nearby. Simply put, BEAUTIFUL. 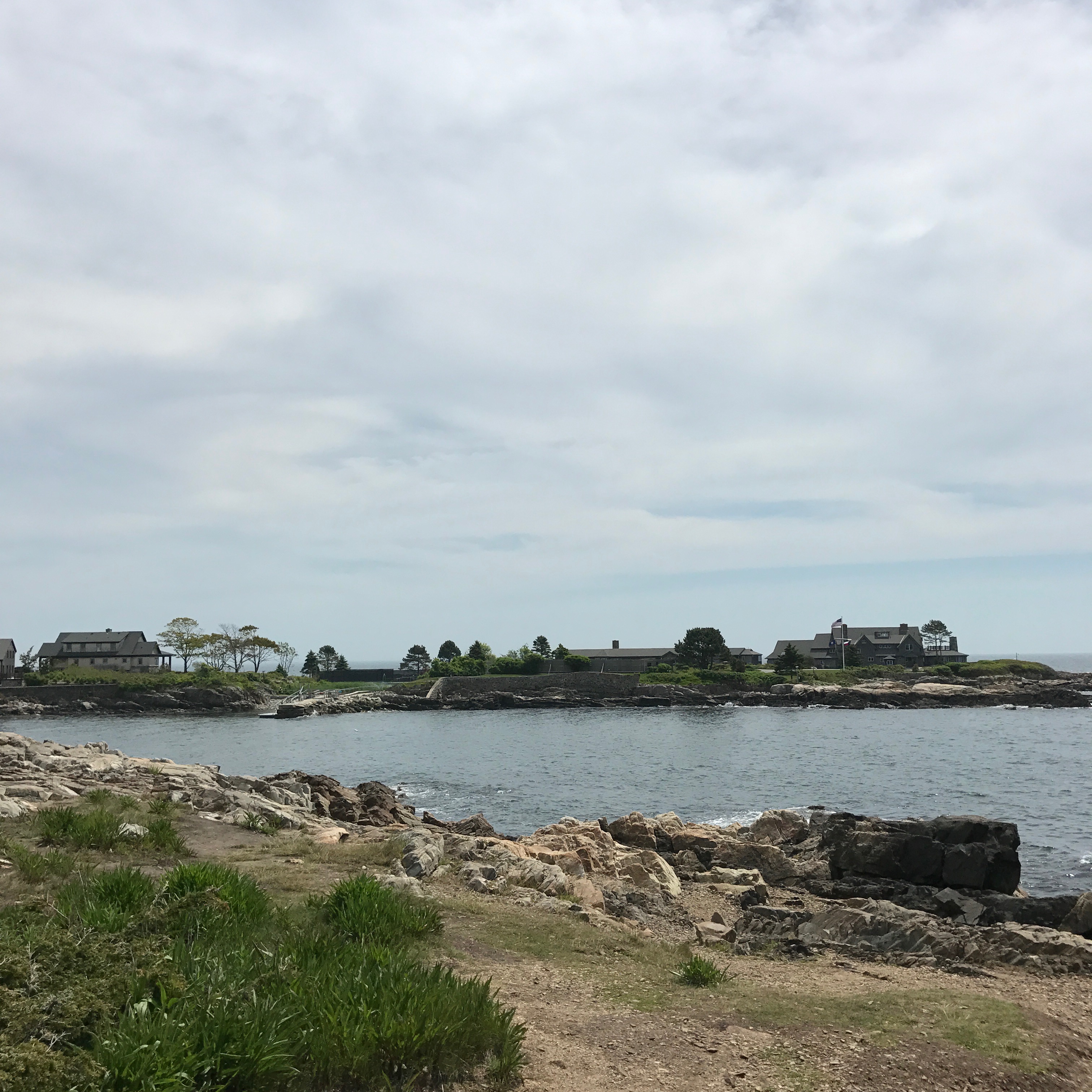 Post beach walk (so many dogs were out!), we opted to drive around town more and caught our first glimpse of President Bush’s compound. OMG, it’s like an island! It was so fascinating to see a President’s home up close (well, with water in between, but you get it!), and we learned there were so many places to pull over along Ocean Avenue while driving. Again, SO MANY VIEWS. Apparently, they have realized this in Kennebunkport. 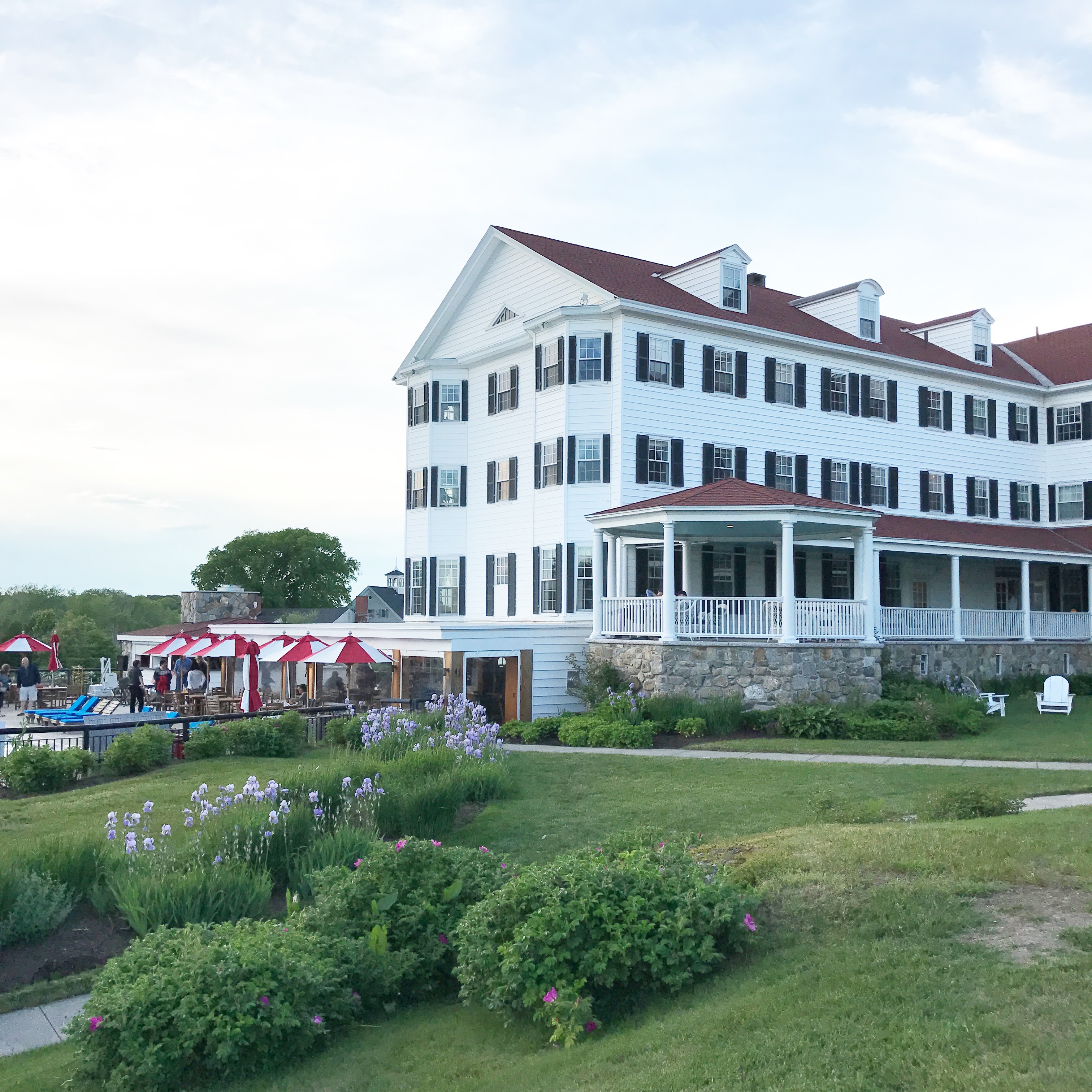 We made one final stop before picking up my dad from his golf outing: The Colony Hotel. Just so we’re clear, I could move right in. The hotel doesn’t have air conditioning – a slight concern if I’m actually moving there – but every room in the lobby was beautiful. I loved the color palette, and the outdoor pool definitely seemed like the place to be. Plus, The Colony has the BEST sunset views. They were so good, we visited again less than an hour later with my dad in tow! P.S: Apparently, the brand has a location in Florida, so I need to go there too! 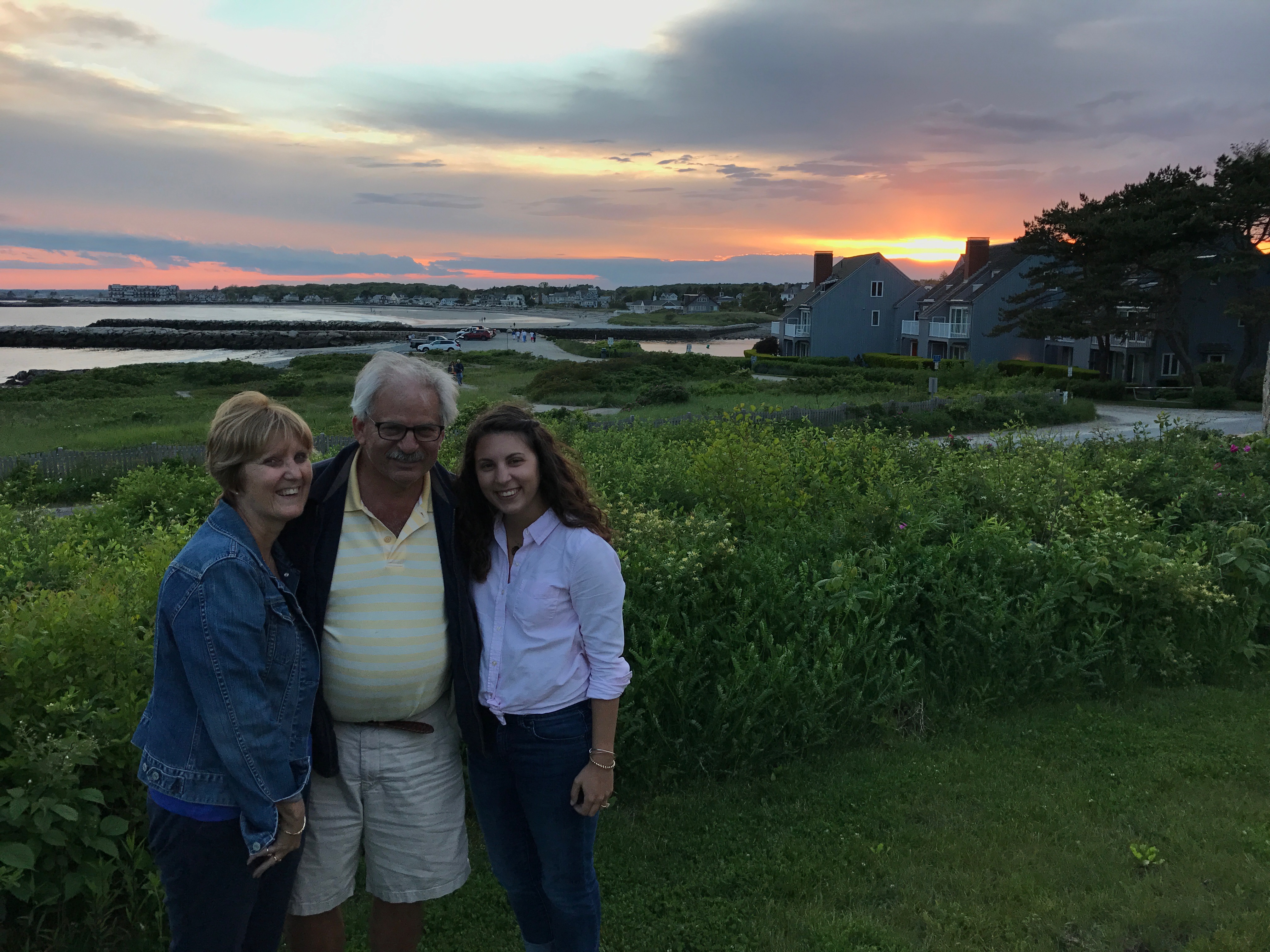 My favorite meal of the trip was definitely at Mabel’s Lobster Claw on our first night. My mom and I met a Kennebunkport resident who said we had to go to Mabel’s when we mentioned we were on a lobster mission (when in Maine…). They have something called “lazy lobster” where they take all of the lobster meat out for you rather than leaving you to your own devices to crack it apart. Needless to say, that’s our kind of dinner…done for us! You can eat inside or outside at Mabel’s (we opted for inside), but either way it’s a super quaint restaurant with delicious food. 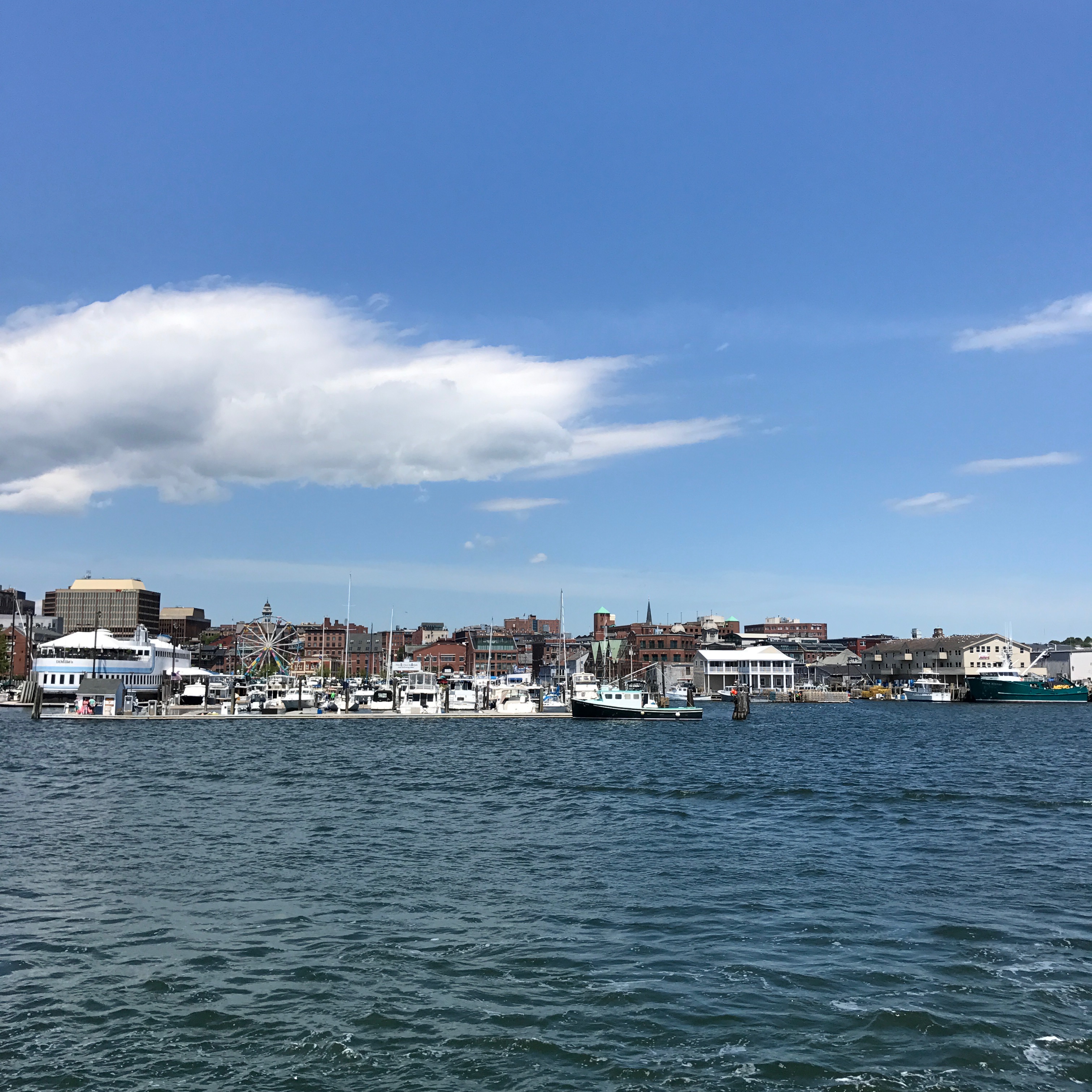 Our second day in Maine (and the only full day we had while in town) took us to Portland. When we learned the city was a quick 40 minute drive from the Port Inn, we knew we would be remiss if we didn’t make the trip! Knowing we had a party to attend (you know, the real reason we needed to go to Maine), we got to Portland early…like, 9:30 a.m. early. BEST. DECISION. EVER. Parking is not their thing, and we scored a spot for the entire day for $10 (if this seems high, let me introduce you to Philadelphia’s parking rates). 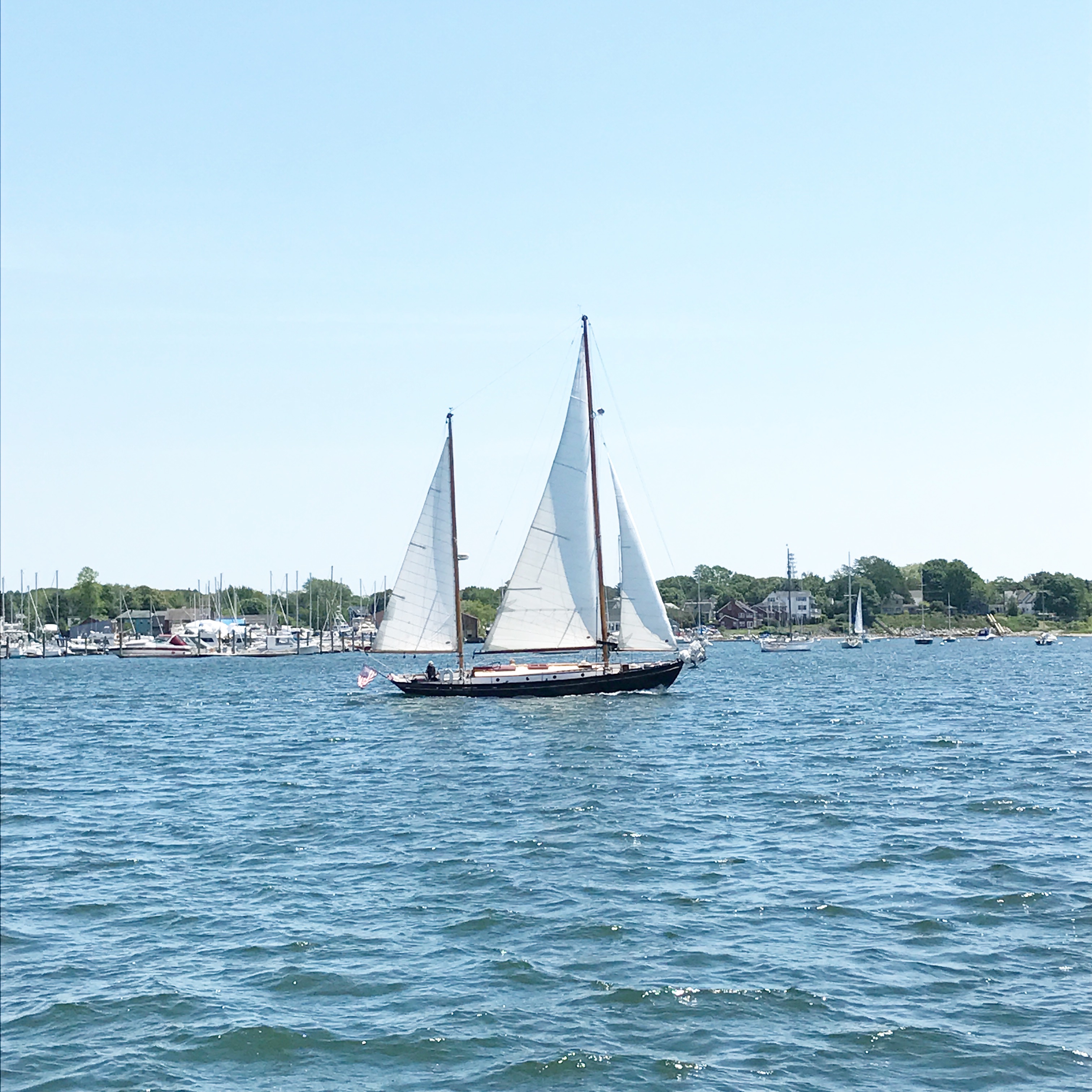 My favorite way to see any city is by wandering. We carefully chose to spend our day in Old Port, and it was a fantastic choice! There are so many shops lining the streets in the area, which made for a fun day of feeling like we were getting a true taste of Portland. Plus, I’m all for shopping in local boutiques! If you go to Portland, you have to go to Stonewall Kitchen and purchase Wild Maine Blueberry Jam. It’s the best jam of life, so you’re welcome in advance. : ) 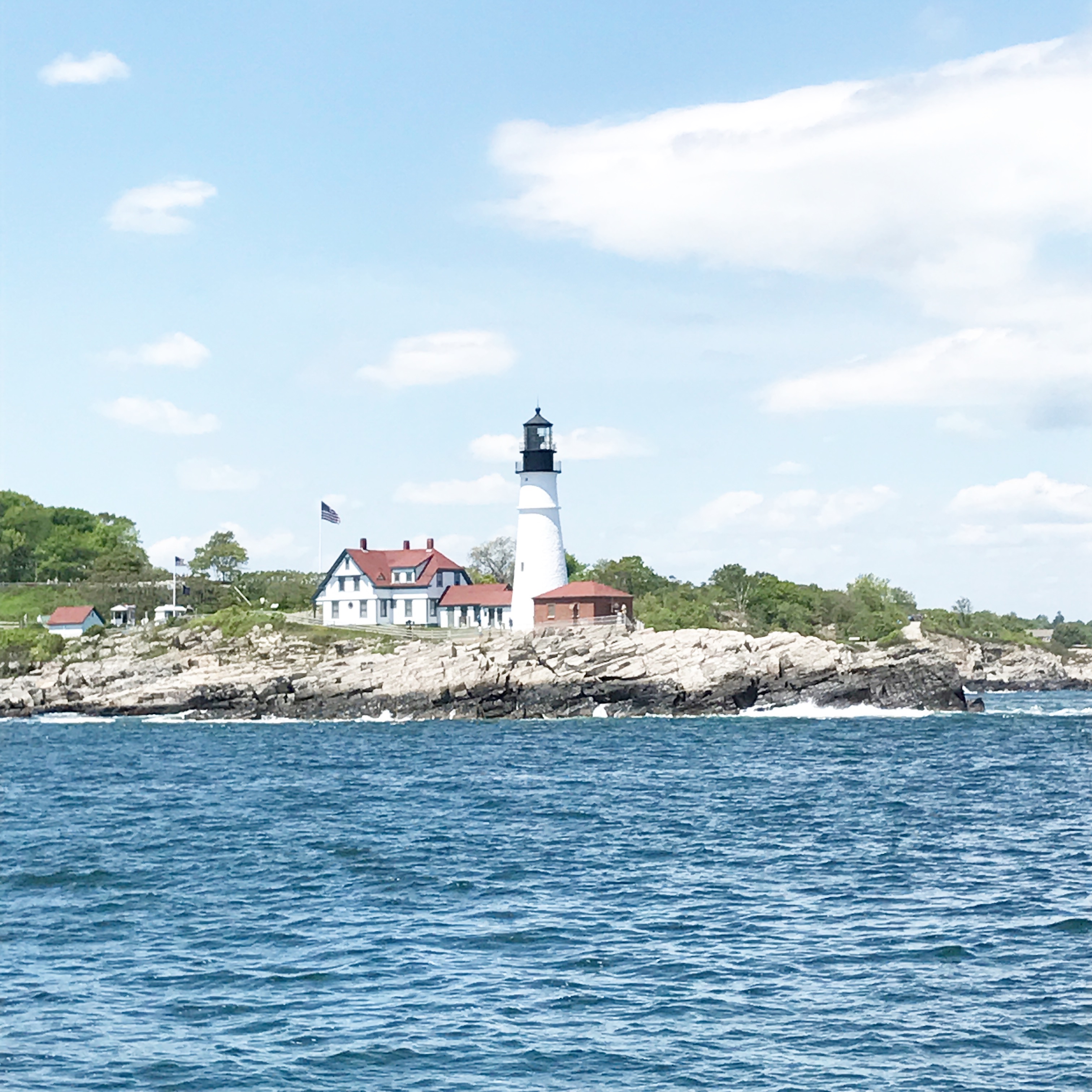 Other than shopping, trying my first lobster roll (winner!), and a three berry donut from The Holy Donut (another place you have to go!), we chose to take a boat tour. Fun family fact: we love boat tours! We chose to set sail with Portland Discovery for a 90 minute tour, which we all enjoyed. Full disclosure: it was SO COLD out on the water. While it was warm and comfortable on land, it was a not-so-balmy 59 on the water. We fell under “not prepared”. We sailed around the harbor where we saw a dolphin, out to the Cape Elizabeth Lighthouse (apparently the most photographed lighthouse in the U.S!), and back again…to where the warmth was. It was well worth it and something I would highly recommend (with a sweatshirt). 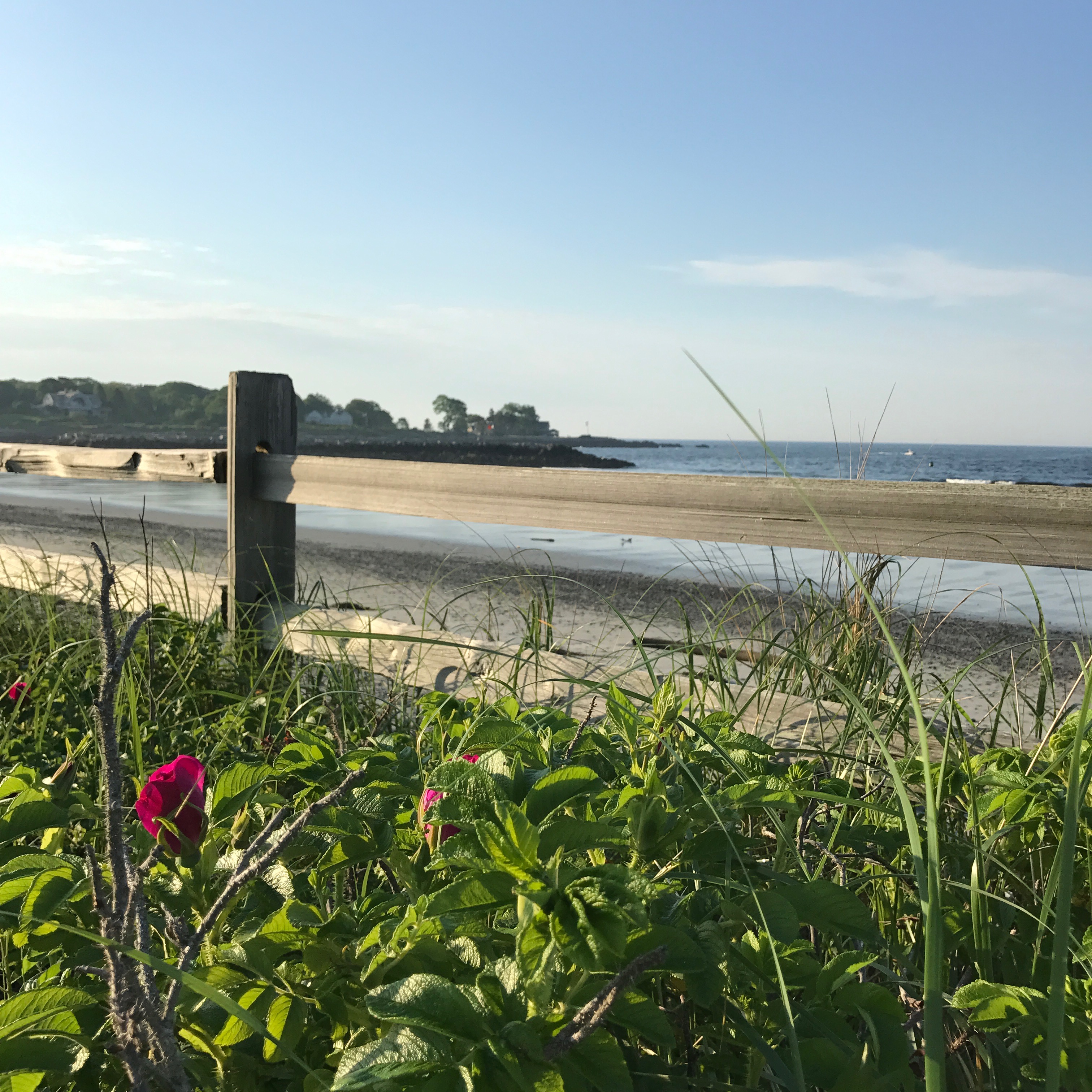 When traveling, departure times are merely suggestions. So, leaving in the morning turned into 3:30 p.m. We spent the day exploring Kennebunkport much more, and we drove along Ocean Drive again, but this time my dad was with me and my mom. We stopped at any vista with a great view, and we went back over to the Bush compound. By day three, they were in residence to celebrate birthdays, which was really cool. 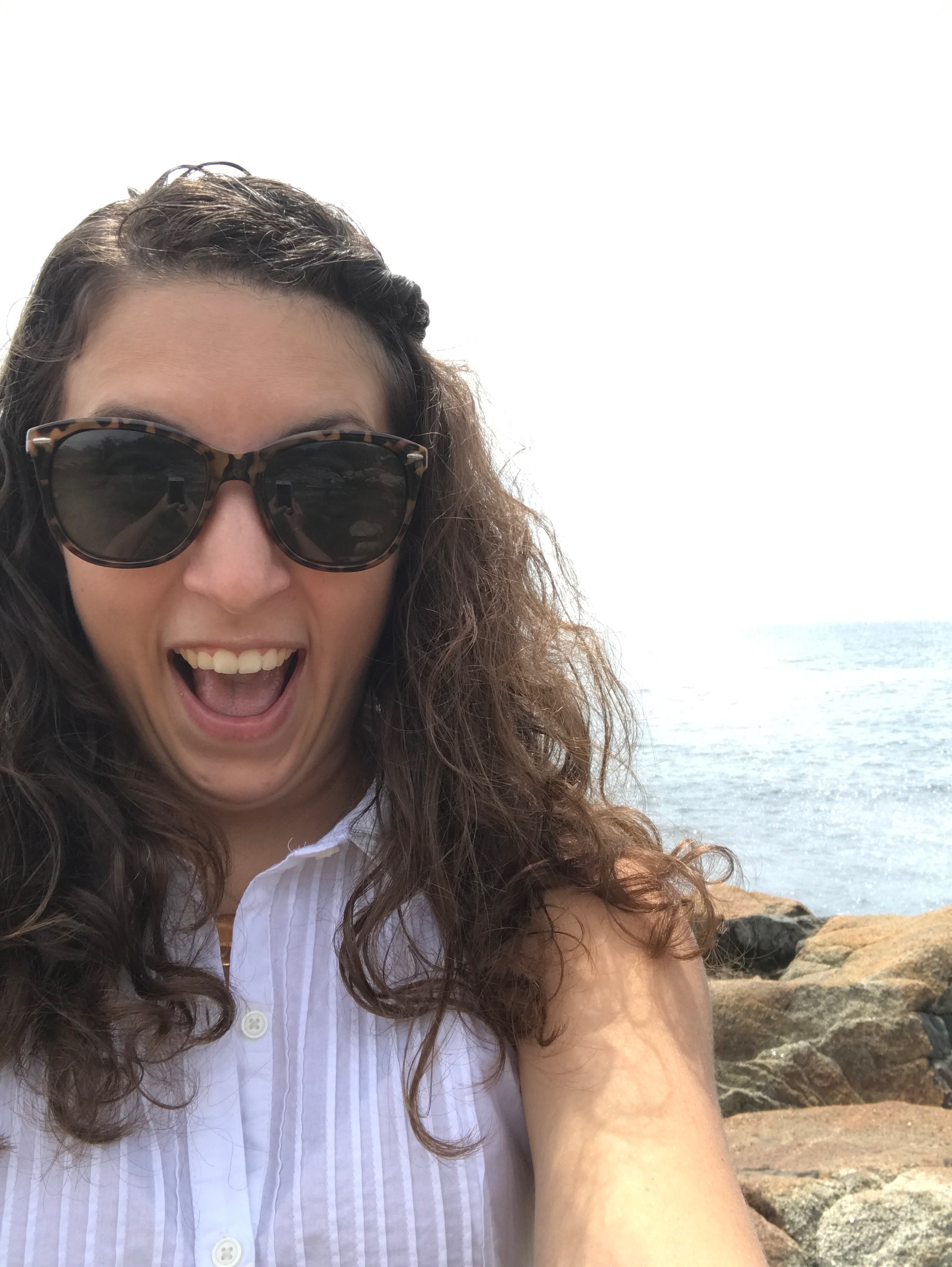 We also found ourselves back at Goochs Beach for a stroll, and I was amazed at how many people were out on the beach. It may have been 94 out, but that water was C-O-L-D, people! We made sure to walk through town, and my favorite shop was The Pink Tangerine. They sell Lilly Pulitzer as well as a few other brands, like Kiel James Patrick, and it was such a sweet stop (I found a new laptop case for under $40…WINNER). 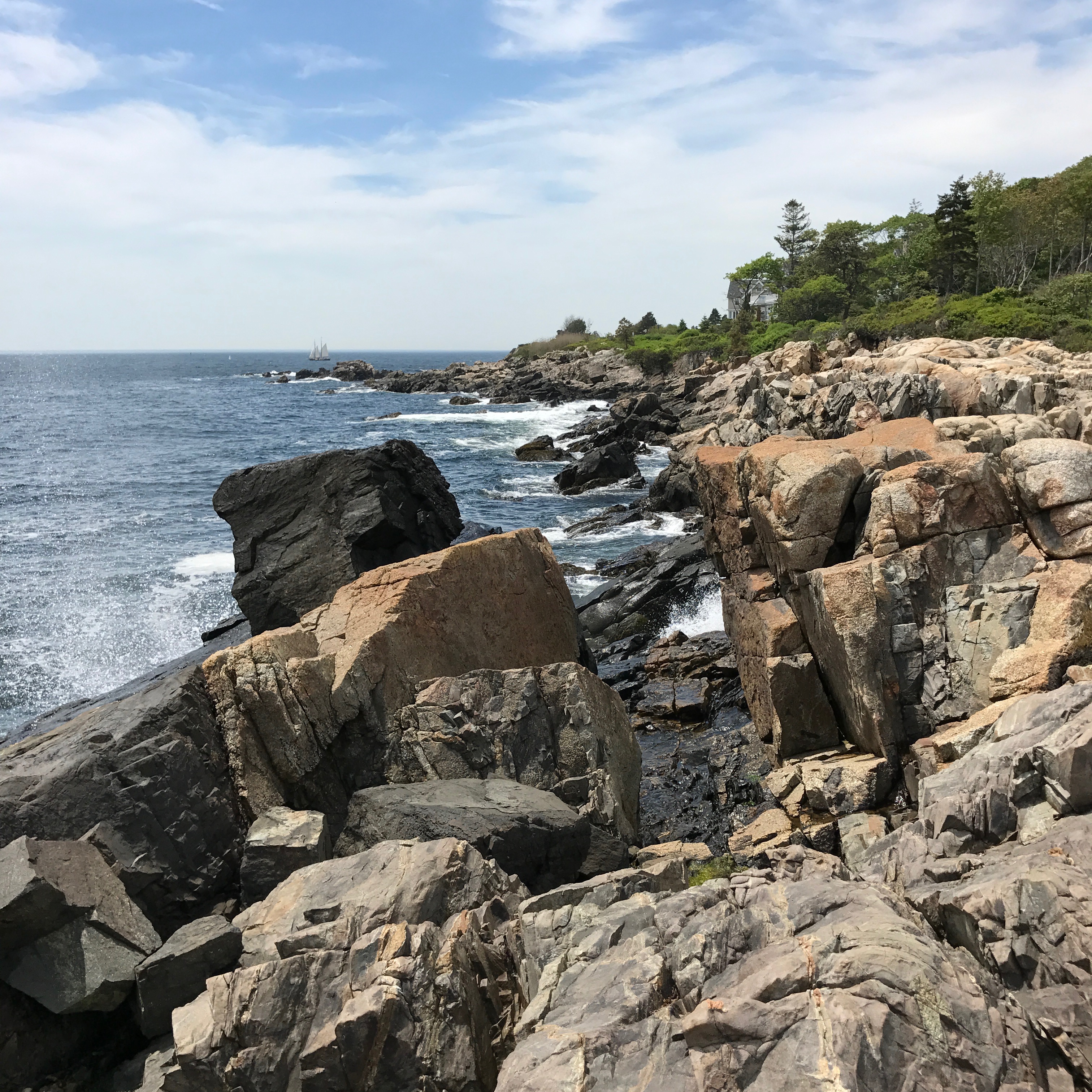 Traveling is the number one thing that fuels me, and I was already planning my return trip back while I was still there! Acadia National Park is the number one place I want to see, so it’s happening. I’m also convinced a trip back to Maine could also include Boston and Rhode Island. I definitely learned I am a HUGE FAN of New England. I get why you love to live there, friends!

Has anyone else been to Maine? I want to know ALL of the details!