My favorite way to explore a city is to wander. And people watch. I hardly ever go up to New York City with a definite plan (unless I’m working, of course). I love getting off of the train and literally winging it. I hop from place to place, shop to shop, and am usually game to try a new restaurant without a second thought about it. My only plan is to see Central Park…at some point during the day. This mindset also extends to vacations and, quite often, my weekends. I favor not having plans and seeing where the day takes me. 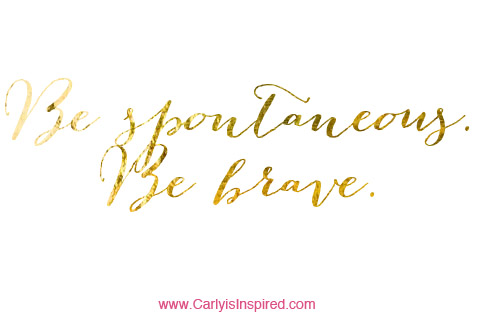 This does not, however, extend to flying. Flying must be well thought out, worried about, and planned far enough in advance for me to panic about facing my fear.

But something took over last week when one of my closest friends called and asked if I would be in town on October 25. I found myself saying no, but quickly following that up with “But I can be! I’ll look into flights.”

I honestly have no idea who this girl is who offers to jump on a plane with only two weeks notice. But I like her. She does things, especially when friends, weddings, and Charleston are involved.

My roundtrip ticket turned into taking a train to a different airport that I’ve never been to before and a connecting flight to Charleston. I have to do the same thing less than 48 hours later when I come home. I’m flying on four planes. I’m facing my fear four times. And I’m really worried about it. But I’m doing it anyway.

Before I attended Making Things Happen, I would never ever have done this. I placed “flying by myself again” on a list of things I hoped to accomplish in the next three years. Next week, I’ll have flown by myself on two separate trips on a total of six different planes within mere months of each other. I’m still scared (yes, with bells on!), but if I can go to New York City without a plan I’m fairly certain I can fly on four flights. The times I don’t have a plan tend to be the most worthwhile, the most memorable.

Be spontaneous. Be brave.

P.S: The winner of the ban.do Twist Scarf in Glitterati Coral is Caroline S.! I’ll be sending you an e-mail shortly! Thank you to all who entered!