As the new year drew closer and closer, I started to have major fears that 2013 was a fluke. Essentially, I didn’t want the year to end because it was quite possibly the best year I’ve ever had. I learned so much about myself, and I was able to rescue myself from the slight rut I had been living in. I accomplished a crazy amount of goals, some of which I had put into the “maybe eventually” category. Each time I crossed one off of my mental bucket list, I found I was fired up and ready to accomplish another one. I loved the feeling of being right in the middle of things. No blank slates; a story already filling the pages.

I did not want, nor did I feel ready, to start all over again. I felt like I had just started. 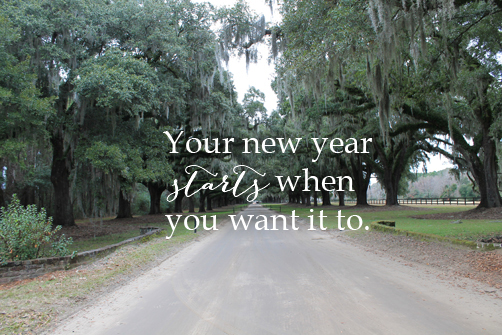 Your year starts when you want it to. It’s so simple, yet when my best friend texted me that message on New Year’s Eve I felt like the biggest weight had been lifted from my shoulders. I was sitting at my kitchen table, and I thought YES IT DOES.

January 1 marks the first day of a new year, but it doesn’t have to mark the first day of your new year. No matter which date you choose, it’s been 365 days since it was here before. Maybe you hit your stride in March, or maybe you turned a corner in August and felt like you were truly becoming the person you’ve wanted to be all along. If your year didn’t start on January 1, then you’re still right in the middle of it. January is just another month to keep striving.

I’m not sure why this idea had such a profound effect on me. But I can say I stopped looking at 2014 as a blank slate, and instead as a year to continue to write the story I want to tell filled with the goals I want to accomplish. I’m ready for you, 2014. No, really. I’m confident I’ll still be saying the same thing in March when my year of so much growth officially comes to a close.

“A year from now, you will wish you had started today.” – Karen Lamb.

There’s truly nothing special about January 1. Starting and completing your year is completely up to you.

« My Heart Belongs by the Sea
Featured on Heart Love Weddings: Brunch and Bows Inspiration Shoot »