Growing up, I tried just about every sport. The only one that stuck with me is tennis. I’ve played since I was six, and I think I love it more now than I ever did before. I realize the benefits of the workout I’m getting when I play, and I also always have fun on the court. Having fun is definitely the most important part!

Aside from tennis, there aren’t too many workouts that have made it past the first few weeks. I tried yoga and Pilates, but realized that I didn’t like or look forward to either. I had a gym membership, which I technically still have but it’s frozen because I would rather run and walk outside. And I run. That one I really do like and have continued to do. Winner! :)

My best friend raved about Barre, but I was so nervous to try it. So I avoided it. Because avoidance allows you to workout and build strength. Just kidding. I was nervous to go to my first class because I’m really not very coordinated. The word “barre” brought me back to my ballet days, and I was so nervous we would dance across the floor. But I was completely wrong. There’s no dancing. Bless the hearts of the inventors of Barre.

I went to one class, and just like my best friend said, I was hooked. Here’s why Barre is different: 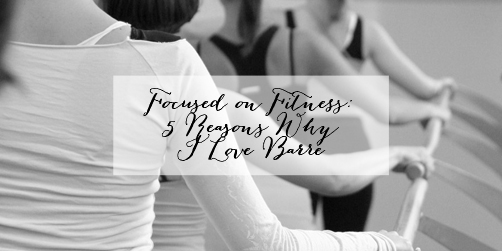 Photo via Cody; Graphic by Carly is Inspired

1. I make the class convenient: If it’s hard for me to attend, I don’t always want to take the steps to go. So I schedule my class on Mondays because it’s one of two days during the week when I’m in the area where my studio is located. I look forward to the class while I’m teaching tennis, and I don’t want to face the regret of not attending when I literally drive past on my way home.

2. The studio is beautiful: As someone who loves interior design (and design in general!), one of the best ways to make me want to visit is to design an inspiring space. I would move into this studio, or at least take a chandelier with me, if the option ever presented itself.

3. The exercises are simple: When I used to go to Pilates, I always found myself getting confused and frustrated at some point. We spent so much time on our backs that I ended up annoyed and in pain wondering if I was doing the stretches correctly in the first place. Barre is totally different. Part of the class is spent in the center of the floor, part is spent at the barre, part is spent on a mat, and we stretch at the end. I’m never confused (yay!), plus the classes are small and the instructor offer tips if she sees you’re doing something completely wrong. I know I’m working out the entire time.

4. Strength > burning calories: Barre is the bomb for this reason. The classes aren’t about how many reps you can do, how many calories you’re burning, or when you will transform your body. The entire class is centered around building strength at your speed. There’s always a mention of honoring yourself, noting that you’re enough, and encouraging you to keep going. My instructor also openly mentions that her legs or arms are done too toward the end of the class. Misery likes company! I leave knowing that I’ve done enough, but I want to go back each week to work better (not harder).

5. I’m forced to forget and focus: Somewhere between doing pushups at the barre and focusing on balancing on a mat at the end of the class, I’ve forgotten about everything else that happened that day or that will happen that week. I’m too focused on making sure I’m doing each stretch correctly, remembering to breathe, and keeping my posture in check. I can’t think about anything else than the present, and I don’t want to.

I’ve been going to Barre classes for the past month, and I can already tell it’s a workout that will stay with me. Oh, and I offset the cost by only going once per week. I’m hoping as Barre becomes more and more popular, the cost to go will lessen to the point that I can go more each week without ruining my finances. Until then, Mondays are my favorite.

Do you go to Barre? Why do you love it? Sound off in the comments!

« Tied with a Bow: Links I Love
Inspired Ideas: Change and Community »