I had a completely different post in mind for today. But then I read Kat’s post yesterday, and I realized I had to echo so many of her thoughts from my perspective. The biggest thing I want you to take away is this: create change; build and be part of a community. 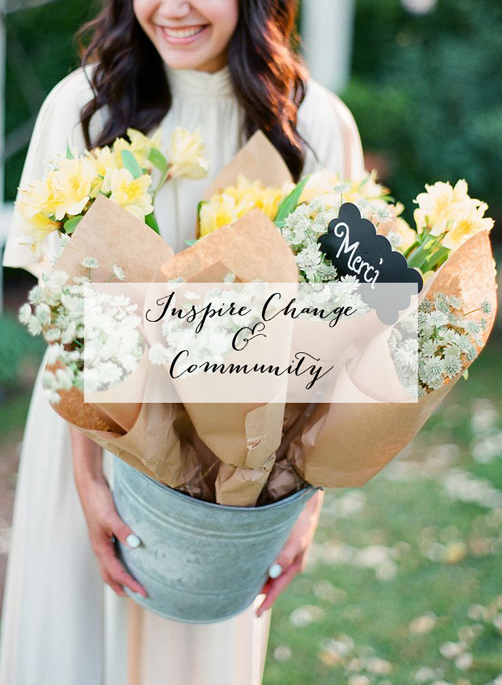 Photo via Style Me Pretty; Graphic by Carly is Inspired

One of the most striking things I learned in college and continue to experience is there are far more people who aren’t interested in creating change for the better and being part of a community. Instead, they strongly believe in doing the exact same thing that those before them have done whether it’s right or wrong. I believe in continuing trends when what is happening works in a great way, but if there’s something better – a way that’s more helpful – you should do that instead. Even if it’s just you following that new path, change course and see who follows. Those who matter will believe in the same thing too and may have already changed their course. Go find them. They’re out there.

Kat mentions in her post that she contacted planners in her area to introduce herself as someone new to the field. Some responded, some said rude things, and some said she had to “pay her dues” just like everyone else. From my first internship in college until now, I’ve experience so many of the same experiences as Kat. My biggest takeaway, just like Kat, is this: I don’t believe in simply paying your dues. And the greatest people I’ve met in this industry don’t either.

There are a host of things I’ve experienced that have been terrible. They’re things I never want anyone else to experience even though they may represent time at the bottom of the totem pole. Did I learn things through those experiences? Yes, I learned exactly what I don’t want, which is definitely valuable. But instead of saying that someone else needs to experience the same “bottom of the totem pole” things as me, I say something instead. I want to stop the cycle because, while some people don’t believe there’s another way, I do. Always. Do you need experience? YES. But should that come at the expense of doing something that won’t provide as much potential to learn, grow, and see yourself as someone who has both value and worth? NO. You may feel that another opportunity won’t present itself, but it will. When one door closes, another one opens. But only if you’re hustling to make that other door open.

The greatest way to find another open door is to find a community. I’ve said this before, and I’ll say it 5,000 times more, but attending Making Things Happen was the greatest introduction into the importance of community. Since then, I’ve met even more creative people who I love calling my friends. I’m part of a group of amazing ladies (and a few gents!) who are all trying to better their businesses and their lives by sharing what they’re doing and experiencing. Sharing is so much better than staying silent and working away with your head down.

The biggest thing I want to fade away, and that I see fading away in some areas, is the idea of competition. Like Kat mentioned in her post, be genuine and be you. Do YOUR thing in YOUR way. Don’t copy what someone else is already doing because they’re already doing it. At the same time, don’t be afraid to share what you’re doing out of fear that someone else may copy you. Share when you love a vendor, share when you find something that works really well, share when something goes terribly wrong. Basically, learn to love talking and emailing about what works and what doesn’t. When you see someone is frustrated because something isn’t working and you’ve experienced that it doesn’t work either, SAY SOMETHING. There’s something to be said about the importance of trial and error and learning from your mistakes, but there’s also something to be said for skipping a potential error and starting your next trial much earlier.

Kat mentions it, and I believe in the same thing wholeheartedly: we’re all playing for the same team. We all want to succeed whether we’re working in the wedding industry or another (equally awesome) industry. But success is much sweeter when you help someone else along the way, and when you have a community of people cheering you on. Don’t follow the same path that everyone else is following. Change your course, find your community, and bring new people on your journey with you.